If you read ‘With a Little Help From My Friends’ you might recall that I digitized all of my photos and threw the pictures and albums out. Aside from creating a lot of room. Having all those pictures to play around with and put memory has been a lot of fun. Though there were certainly a few that saw new life with minor adjustments in Photoshop and Lightroom. It was the countless show photos I took at clubs, bars and halls that presented a very different challenge. That of remembering the bands names and methods of operation.

Funny, but I remember being at this show, taking this shot and standing on the side of that storied CBGB’s stage. I remember my friend Brendan working the door. while I can’t remember the band name or that of the guitarist. I remember they were the third band out of the five that played that day, I recall when the guitar string broke and how it led to the uncontrollable bleeding that followed. Undaunted, he finished the song and even the set before wrapping a rag around the cut and wiping down his guitar until all the blood was gone. It was the 90’s and CBGB’s was still the things of legend. Independent rock & roll was hanging on to its last threads of danger. Men were men. Sheep were scared and bands finished their sets, no matter what.

Looking back, I’d say my journey as a photographer began during my early days in Hell’s Kitchen. Though I had been fascinated with taking pictures since my teens. It wasn’t until I was occupying a one-bedroom in the heart of the west midtown area of Manhattan that my then boss gave me his old Nikon EM SLR along with some film and a couple of photo books that my hobby turned into an obsession. I quickly began documenting my surroundings while graduating from one-hour photo chains to professional printing services such as Duggal and B&H. Within a short time, the towels and sheets that fit neatly in my apartment linen closet were displaced by boxes of photos and trays of slides. My trips to places like Duggal and B&H quickly quadrupled. From my eight years in Hell’s Kitchen to my married life in New Jersey and Washington state. My passion and obsession for photography never waned. My need for living space grew, and the number of photo boxes, enlargements, and ane studio gear morphed. Quickly realizing less is more, I used the premise of moving to digitize all those negatives, slides, photo boxes, and albums before tossing them in the garbage.

As I begin to get the digitized photos back, I can see the vast progress I’ve made over the years. Kicking myself, in a sense, for holding on to the past for so long. Undoubtedly, many photos accurately documented the time and people. Most of it, unfortunately, was junk. Luckily though, there were a few that jogged some serious memories. Photo’s that still show a measure of intent and purpose.

Taken on 48th street and 10th avenue shortly after a snow storm. You can hopefully see the emphasis on the reflections the puddles give. You should also get a rare view of a traffic-free New York City street. Not bad for a photo I took more than twenty-five years ago.

Bivouac were a band from Derby, England who had an excellent album called ‘Tuber’ on Elemental in 1993. On that album was an acoustic jam called 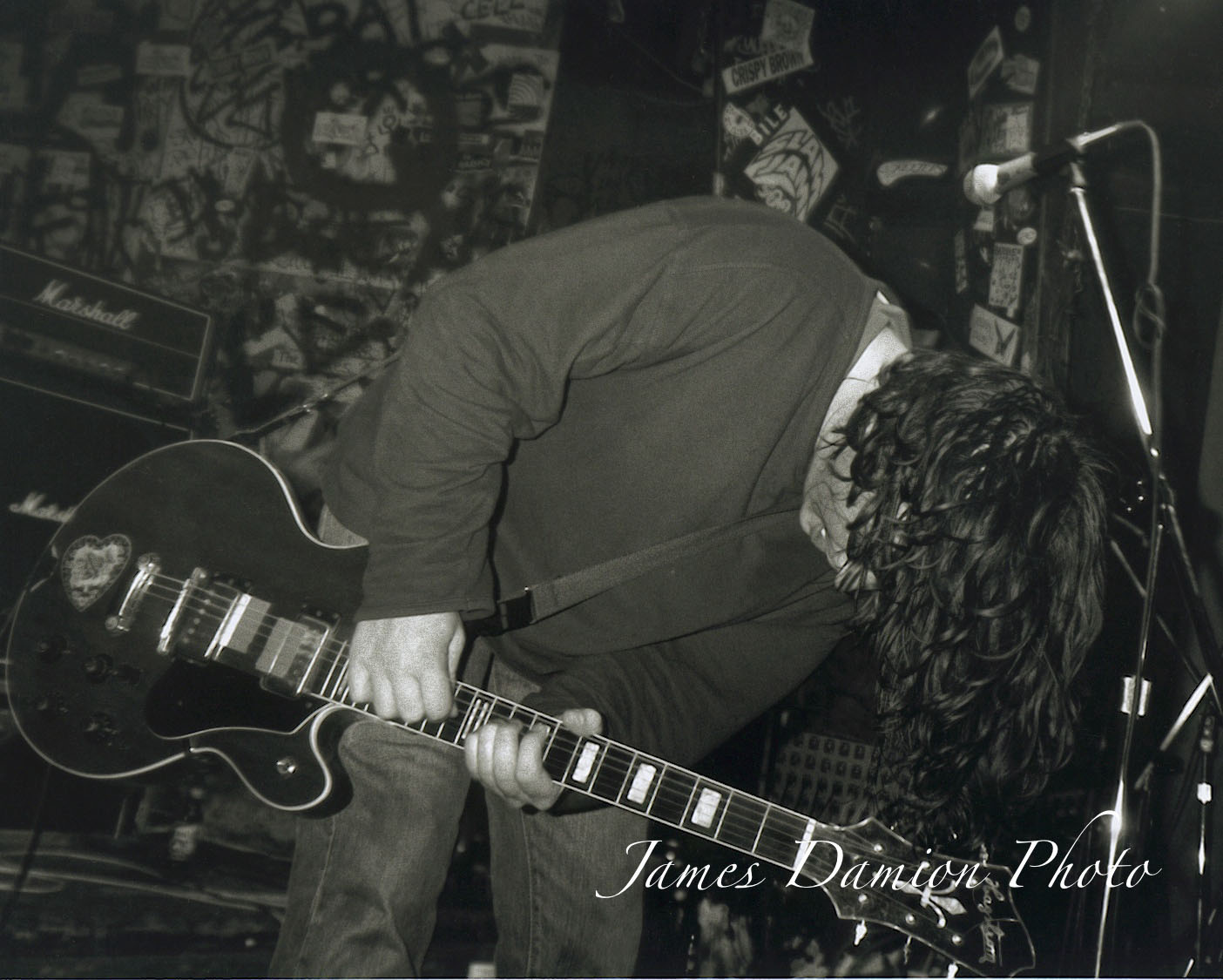 ‘Dead End Friend’ which featured a verse “Daren’t go to the dentist…for fear of being (pause) fucked while you’re asleep.” It was a great song and I played the fuck out of it. When the time came for them to tour, they stopped in New York City to play CBGB’s. I was able to set up an interview with which was conducted outside the club guitarist, vocalist (pictured below) Paul Yeardon, in which we talked about touring, the bands reactions to being in New York City for the first time, and of course, our mutual fears of the dentist. I highly recommend checking out the band and learning more about their music.

How I wound up in a car headed to Connecticut with a Hare Krisna band is a conversation for another day having forged a friendship with one of the ban’s bass player just days before was enough to secure a seat and a round trip ride with the band Baby Gopal. After a stop at a Brooklyn Krishna temple and dropping by Sri’s in-laws (Ray Cappo’s parents) home, we headed to Connecticut’s Tune Inn, where Baby Gopal and a host of other bands, most notable for me, Samuel were to perform. Below are a couple of images I captured of the group. 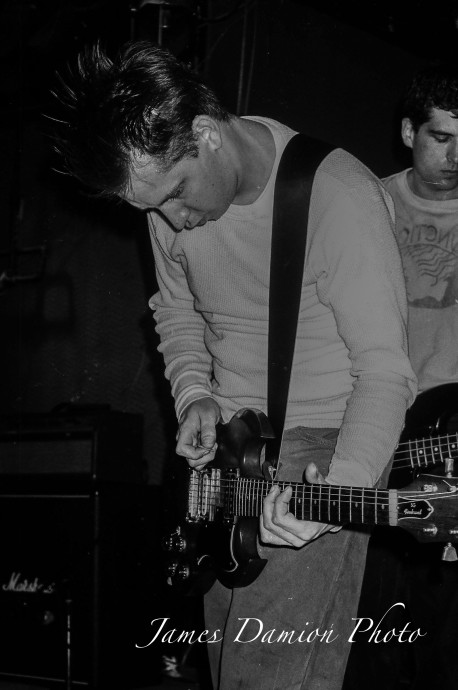 The bands ‘Lives of Insects’ ep on Art Monk Construction still sits in my record collection today, receiving regular play. There are a couple of other singles out there, including a split with New York’s Texas is the Reason, also released by Art Monk Construction. Check them out Here 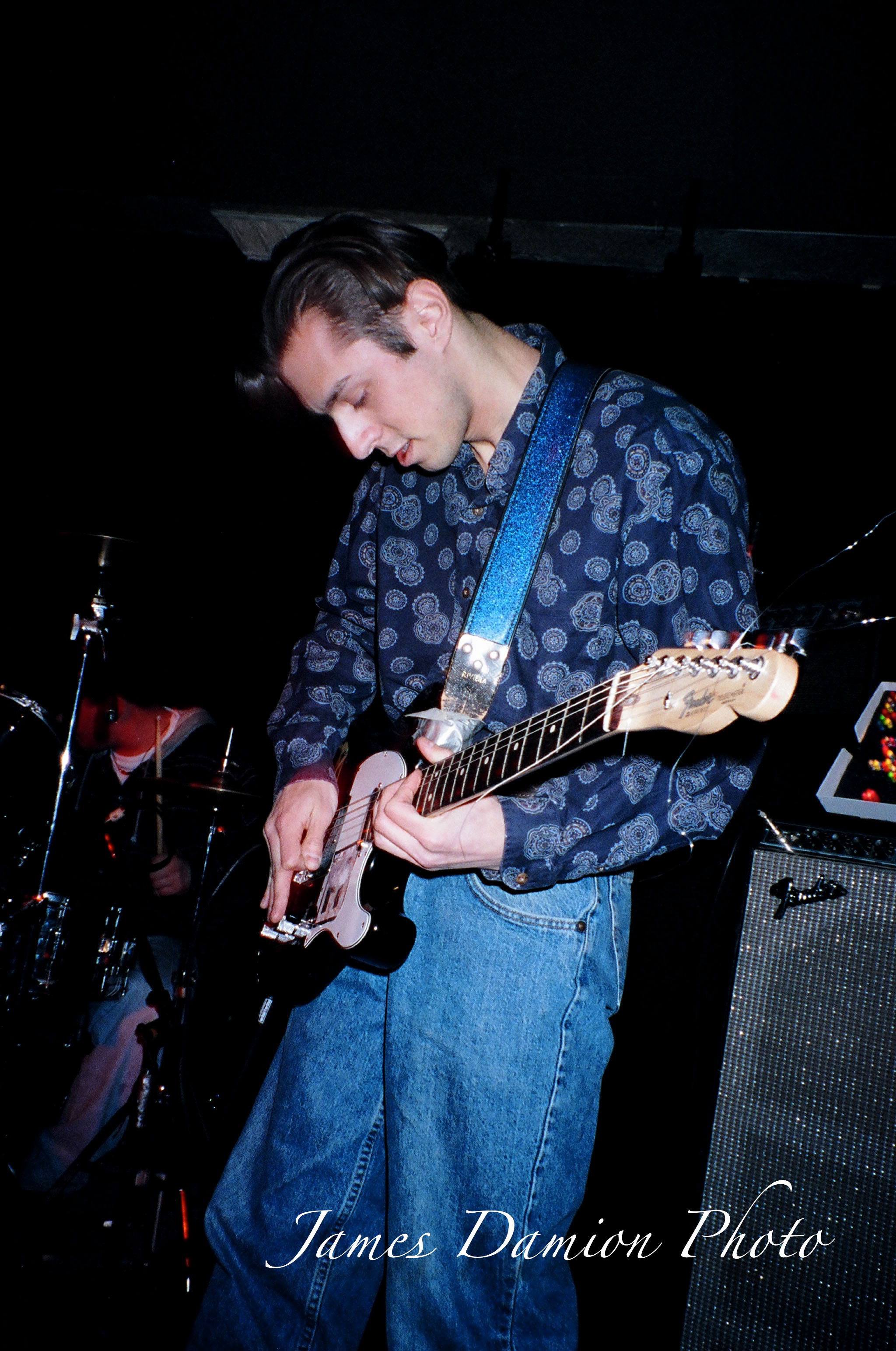 One of the earlier shots taken during my photographic journey. One I look back on with a sense of pride. This one of Jon Procopio playing guitar with Dahlia Seed at what I believe to be Maxwells. Jon, also known as Dapper Jon to some, played guitar with both Dahlia Seed and Dune Buggy. Two bands I loved and still love. Jon is, without a doubt, one of the nicer people I’ve met along the way. Long after the band’s breakup, I’d look forward to seeing him friends BBQ’s, parties and social gatherings. Being that Dahlia Seed were and still are a very special band to me, this will be only one of many posts featuring the band. For now though, I just wanted to give Jon and this image their propers.

The ’90s were often a strange time for New York Hardcore and what was, for the most part, post-core. While bands like Quicksand, Into Another, Burn, and Orange 9mm each thrived to some extent. There were many more that seemed to flicker, yet quickly burn out before making much of a name for themselves. I got to see many of these acts at places like CBGB’s, The Wetlands, Brownies, and The Continental, to name a few. Lady Luck (pictured below) was one of those bands. Featuring a cleaned up looking Roger Miret (Agnostic Front) on bass and his wife Denise on vocals. They recorded a ‘7-inch ep for Mendit in ’97. A split LP in ‘ with another promising band named Fully the same year and a full length ‘Life in Between’ in 2000. I only saw them this one time at what was pretty much a hippie club in the Tribeca area of Manhattan. I remember Denise having a beautiful voice and, if memory serves, they delivered an excellent set, but as someone who was used to seeing Miret work the stage covered in sweat, tattoos, and screaming into the mic with a sense of primal rage. Seeing a subdued version with slicked-back hair and a velour shirt was just a little too surreal for me.

Though popular within the punk community at the time, bands such as The Casualties and (pictured here) L.E.S. Stitches never really appealed to me. As a pretty clean-cut hardcore kid, the punk revival of the 90’s never captured my interest. Considering how often I ventured out to see the Radicts, Turbo A.C’s, Suicide King, Snake Charmers, and Electric Frankenstein, it’s safe to say I liked the music a lot more than the clothes and imagery. With that said, I admit to having a positive reaction when it came to the one, and only time I caught them live. There was a lot of energy from both the band and the people in attendance. Not bad by a long shot.

Here’s another photo from that Staten Island VFW show. Though I could be wrong, I believe this be the Aaron Lazausk of the Rockville, Connecticut emo/noise-core band Cable. Like I said in my earlier post featuring an image of Three Steps Up,

there were some really amazing bands on this bill. At the time, the band had a split ‘7 inch with Staten Island’s Malcom’s Lost (also on the bill) and were just about to release ‘Variable Speed Drive’ on Doghouse records. An eight song powerhouse that I would come to know the band best for. When I think of all the now highly regarded bands I saw in basements, cavernous clubs and VFW halls, it gives me somewhat of a rush. Almost as if I was on to something long before all the squares got a hold of it.

Though some of my negatives haven’t stood the test of time, my memories have remarkably held up pretty well. At the time this image of New York City’s The Candy Snatchers was taken at 3rd avenues The Continental. I had just begun dating my future wife and working nights at a record store a few doors down. 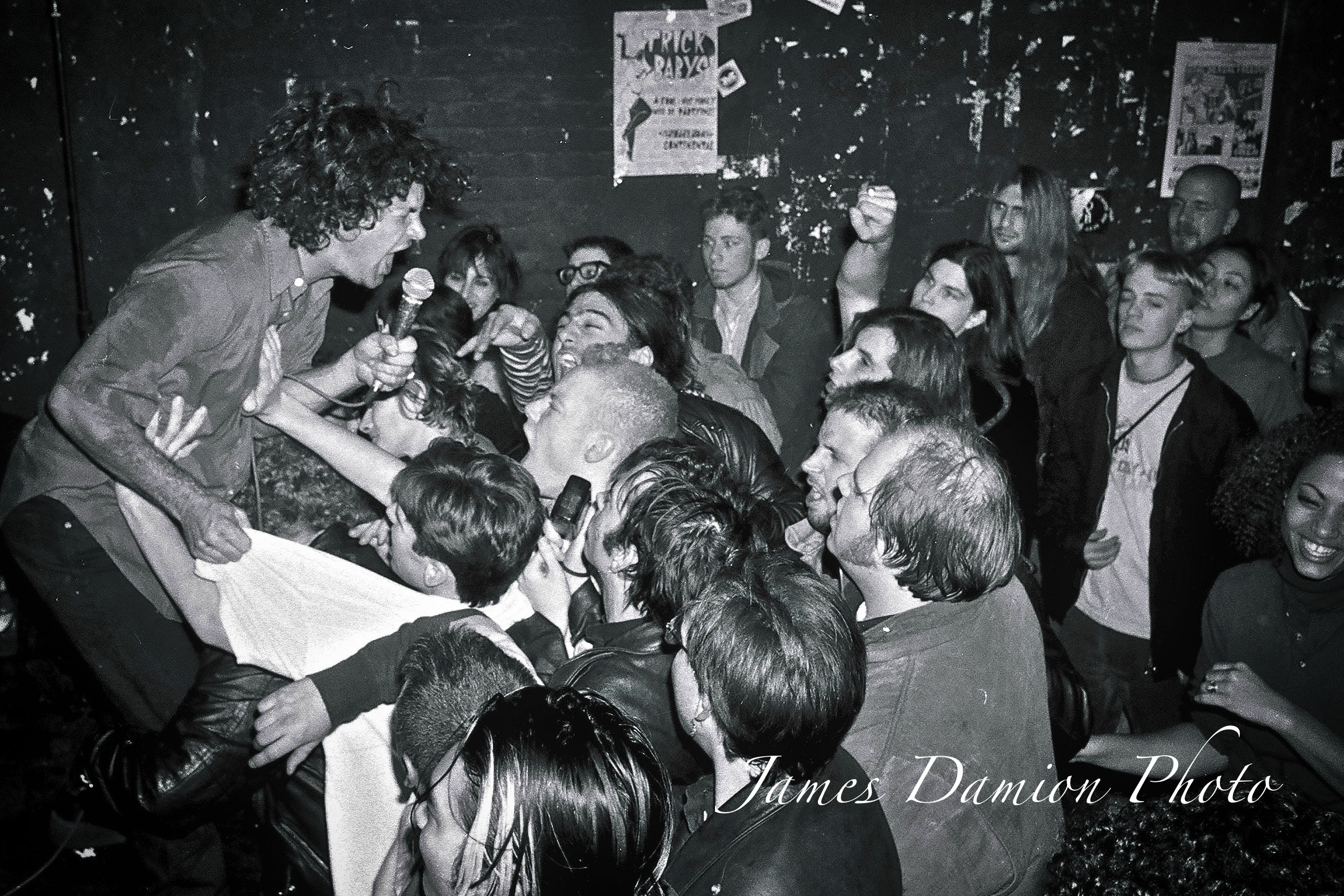 At the time, the Continental was hosting a lot of great bands that seemed to fit into the cities punk rock revival. During a relatively short time, I got to see bands with names like The Deviators, The Turbo AC’s, The Suicide King (Featuring Nick Marden of the legendary Stimulators, The Snake Charmers and (pictured here) the Candy Snatchers.    The Continental was tiny with the bar on the left and the stage in the back. Like most of Manhattan, the Continental and the adjacent St. Marks Street bare little or no resemblance to the once edgy character it was once known. The last time I visited the area, The Continental was a yuppie bar, and St. Marks was lined with trendy restaurants and frozen yogurt chains. What I liked most about this particular band was that element of danger tthey always seemed to carry. That kind of Stooges vibe. Being in my twenties at the time. I liked the element of anything can happen at any time. A stark contrast to today, where so many people at shows are more engaged with their phones and social media, than the actual event.

Though it took time to fully embrace the fact that Underdog (One of my favorite bands of all time.)

was done and their charismatic singer was on to new and much stranger things. While Richie and Into Another weren’t the first one’s to explore new sounds outside of hardcore punk, they were definitely the most eccentric. After two landmark releases with Revelation Records, they were swept up by Hollywood records at a time when major labels were circling the indie market in hopes of signing the next Nirvana. As a vocalist, Richie Birkenhead’s range was like no other before or since. As a band, Into Another raised the bar as far as creativity went. 1994’s “Ignaurus” still stands as one of my favorite albums of all time. With the song “Drown” making its way onto many of the playlists I share.