Here’s another photo from that Staten Island VFW show. Though I could be wrong, I believe this be the Aaron Lazausk of the Rockville, Connecticut emo/noise-core band Cable. Like I said in my earlier post featuring an image of Three Steps Up, 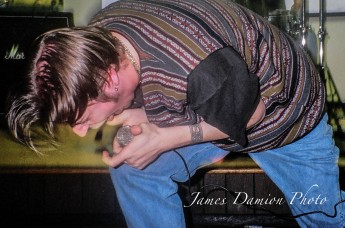 there were some really amazing bands on this bill. At the time, the band had a split ‘7 inch with Staten Island’s Malcom’s Lost (also on the bill) and were just about to release ‘Variable Speed Drive’ on Doghouse records. An eight song powerhouse that I would come to know the band best for. When I think of all the now highly regarded bands I saw in basements, cavernous clubs and VFW halls, it gives me somewhat of a rush. Almost as if I was on to something long before all the squares got a hold of it.