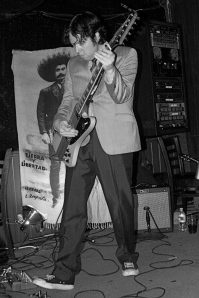 every show I went to. I felt it was so important to document the time and the music. This went on for years. A lot of the pictures turned up in the interviews I did while most of them ended up in boxes or albums.  There was a lot of crap here and there a lot of gems that really captured the moment and allowed me to fondly look back on that  time and place. Over time though I became more interested in other aspects of photography and would only take my camera along  occasionally or when I had a rare assignment. The weird thing is it’s become this weird catch 22. When I don’t have it with me someone always asks “Where’s your camera?” like it’s my duty. There are also times when I go to a show and I feel naked without it. Or I really like the band and wish I would have some pictures to visually remember it by. A month or so I went to see Walter Schreifels at the Studio in NYC. I didn’t bring my camera because I had never been to the place and wasn’t sure of the policy. I wound up regretting it. A few nights ago Wally played here in Hoboken and I decided to bring the appendage along with me. Walter best known for his sheer genius as a song writer, guitar player, producer and singer for countless bands including Gorilla Biscuits, Quicksand, Rival School, Walking Concert and countless others plays a stripped down version of various tracks from those projects.  All while throwing in some tracks from his solo album which is due later in the year. If your looking for a Gorilla Biscuits or Quicksand show this ain’t it kids. This is stripped down but a lot of fun. It’s also good to see Arthur (Gorilla Biscuits, Token Entry, Underdog, CIV) up there with him. Lifetime friends who show a lot of on stage chemistry. Some favorite songs were “Delusional”,  “Thorn in my Side” and “Open Letter to the Scene”. But “Society Sucker” continues to be the one that really moves me. To take one of the sickest, heaviest Agnostic Front songs and turn into something I want played at my wedding (without sucking) proves the man is a genius. Great hanging out with Dave and Eric. Nice joking with Walt and Art. Cracking jokes and being an asshole. Thanks to Brian for the free beers. It was a pleasure meeting you. I just realized you’re one of my My Space friends. BTW, I still have no idea who that dude with the headband was.