For years now, our weekends have included road trips that have taken us to many cities, states, farms and out of the way eating destinations. Some of my favorite have been out to the countryside where we get to enjoy things that us city folk don’t get to enjoy during the work week. And with all the roadside attractions and calls to “Stop the car. I’m getting out.” It’s a near miracle we ever get to our final destination. With all the recent verbal onslaghts of “People live here, you know.” and “You’re on private property.” I have learned to choose the ground I tread  on lithely. In this case, with a 50 mm lens. I was able to keep a safe distance. Though no one showed up or emerged from the collapsing structure. I definitely felt a presence and history as I walked among the ruins. 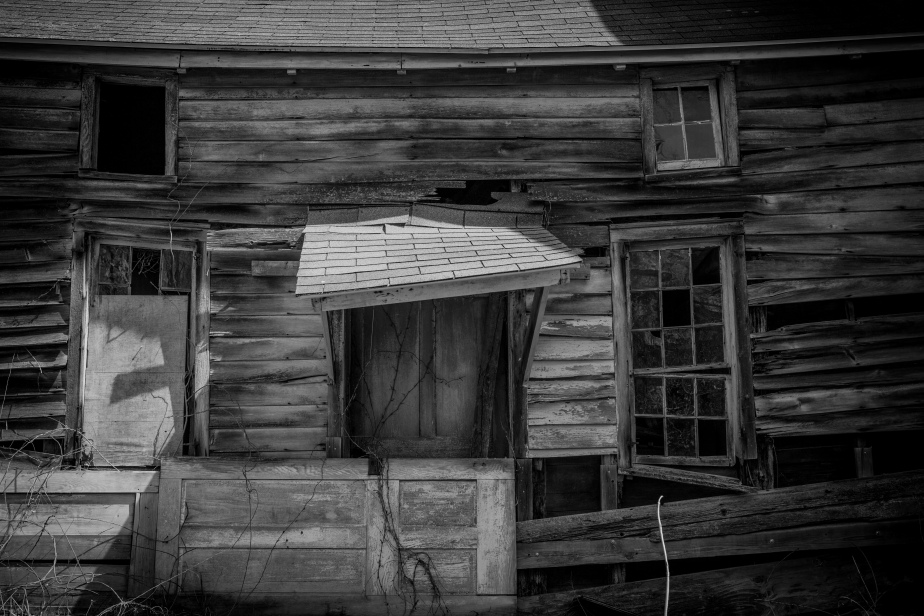 Every now and then we need to be taken out of our comfort zone,.Shook up like good cocktail and have a little in your face with someone about something. When I look back on today’s little war of words. To be honest, with all the off the grid shooting I’ve been doing over the years. I’m surprised it hasn’t happen more often. Especially with some of the chances I’ve taken of late.

It was today’s little exchange however, that both caught me off guard and left me a little rattled. As we were returning from an Easter breakfast at one of our favorite upstate farms. We stopped along the side of the road to get some fresh vegetables to add to the days take. As my wife parked the car and headed towards the farm store. I crossed the road to get a closer glance of an old and (What I thought was abandoned barn.)  As I began to cross the road I noticed two women walking towards me looking quite agitated. The younger one asked me what I was doing. I respectfully replied “I apologize If I’m on your property. It’s just that I was intrigued by that barn.” “Oh, that’s just an old broken down barn. I don’t mind if you take some pictures.” The offer seemed a bit back handed and she went on to note that the two dogs that accompanied her and what could have been her mother or the towns crypt keeper. So off I went. Moments later, that same woman was riding towards me on her bicycle armed with enough anger and spite to fire a mouthful of teeth straight into a vital organs. “This is private property! I didn’t say you could get close!” Jeezus, I thought she was going to pull out a pistol and shoot me dead. To say the very least, the exchange was so heated. I was expecting everything from a visit from the police to an updated version of leather face emerging from the barn. At the time. I didn’t feel I was in the wrong, but in retrospect. Maybe I just wore out my welcome. Lesson learned. Tread lightly, I suppose. I did manage to get a few shots without ever stepping inside. There was enough useless garbage stored inside the fuel a full season of Hoarders. 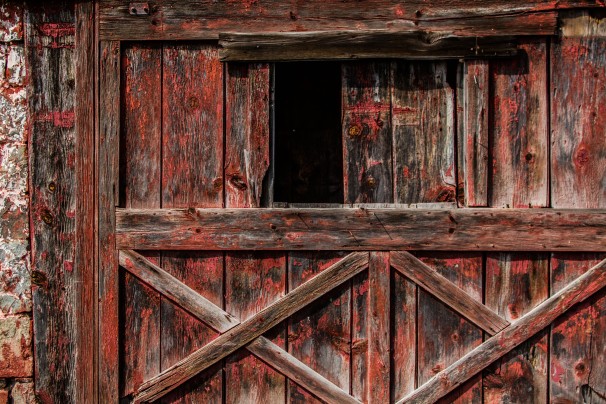 After an unexpected trip to Paramus we shot down to Edgewater to do a little grocery shopping at Whole Foods and Trader Joe’s. Being that each store sit a matter of feet from the Hudson River. I often take the opportunity to take a photo or two while my wife starts her three hour trip down the first aisle of either store. And while today’s trip through the veggie section of Trader Joe’s didn’t take quite as long as expected.     It gave me plenty of time to catch a few pictures of the wreckage that sits just off the short walking path on the Hudson.

While I had photographed The boat that lies to the south side of the two vessels. The one pictured sat closer. Allowing me to get more  detail. The second picture took a little searching to discover. While I’m not sure of it’s key function. I’d like to imagine it’s switches, levers and wiring control the destiny of every person, living space and business in the entire county. While I hadn’t been to the area in quite some time. I’m happy to have found some neat stuff to focus my lens on. It seems that every trip outside my door is an opportunity to discover something new.

I’ve lived in New Jersey for twelve years now and in that time, done my share of driving. Wherever my travels take me, be it far or near. I always find myself feeling enamored with the factories, railroads and industrial sculptures that feel somewhat out of reach to a driver speeding down the interstate.

Whether I’m driving alone or with a sidekick.         The thought of pulling over or taking the next exit to seek out the adventures that often tease me to look deeper. That said, the thought is often just that. The facts that I’m usually on my way to something and driving at speeds that will most likely warrant a summons often postpone my urges to explore. Add to that, the areas that intrigue me the most are off limits and often patrolled by very suspicious security and or folks who call 911 as if it came with a free pizza.

So after moving to an area that was essentially surrounded by the same things that have intrigued me for years. I decided to take it upon myself to seek out those elusive treasures on foot.

The risk of going out with a camera and photograph what is basically private property definitely has it’s risks. I learned this early on when I was innocently out shooting for a portfolio titled “Left Behind”.     During that time I was confronted, chased by security guards and even detained by police as a possible terrorist suspect. Despite the possibilities of arrest and possible bodily harm. I find the rewards far outweigh the risks. It’s something I’ve been drawn since my pre – K days when my Father would bring me to the junk yards that lay just beyond Shea Stadium.

Till tis day, I find  myself drawn to explore the factories, railroads and industrial centers more and more. And while I’d never recommend trespassing or breaking the law. I whole heartedly support following and documenting the things you love. Get out there, find it and document it. The world is yours. 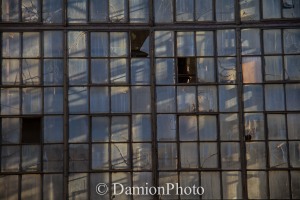 We had a long road ahead of us on our trip home from Boston. One which included a lunch stop for oysters and lobster at Moorings in Newport. There weren’t going to be many opportunities to stop and indulge myself taking pictures of the overwhelming amount of visual stimulation we were viewing along the way. I knew this full well and held my tongue as we passed the countless farmhouses and deteriorating structures that highlight our chosen stretch of road. The conversation quickly turned to my wife’s favorite subject, (aside from food) photography. I began to spin my sob story about how much of the things I love to shoot are becoming harder and harder to access due to the continuous whitewashing and franchising of so much of the things unique, gritty and dirty.

Just as I headed into mid rant, I hit the brakes suddenly  and swung the car into reverse. There it was, my personal playground. I paused for a few seconds. Used my peripherals to spy any local authorities of black ops before leaping from the car with my camera. Knowing full well what had just happened she shouted “Be careful.” So while she waited in the car keeping a watchful eye for the law. I sorted through the wreckage and refuse of what used to be an automotive repair shop. From my childhood days of scavenging the numerous junk yards behind Shea Stadium to my current hunting trips for all things left behind. I’m drawn to these stark treasures. Got junk? 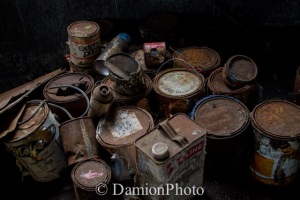