Last night Maxwells hosted a rare and uncharacteristically ear punishing trio of bands. The Nolan Gate, WetNurse and Kylesa. About a month ago I got wind that my friends The Nolan Gate were going to be opening for Coheed & Cambria at the House of Blues in Atlantic City. Without a doubt their biggest show to date. I’ve known Tom, Paul and Dave for a really long time and i’ve missed more Nolan Gate shows than I can count. However, when I do manage to show up I’m reminded what amazing musicians they are. Both collectively and individually. Sure I was bummed I was going to miss their big show in Atlantic City. There was no chance I was going to miss them in my own neighborhood. I’ve always loved going to Maxwells. Through the years I’ve seen some of my favorite bands there. The small, intimate vibe and familiar faces always make you feel at home. The sound is great and it’s only a few steps from where I live. The Nolan Gate opened the show with their signature heavy, sludgy, thick apocalyptic sound. Despite being ear piercingly loud NG are really musical. With lots of breaks and grooves. Over the years I’ve become pretty familiar with the songs. Sometimes making it easier to know what’s coming around the corner. NG are a pretty stationary band but are quite menacing regardless. There is never a dull moment to be had with these guys. I’m really curious to see how they will handle the stage tonight at the House of Blues. They are definitely a band that deserves more recognition. NYC’s WetNurse followed and all I could think was “This is sick”. I’ve never been a big follower of Metal and haven’t been to many shows since my teens. But this was something to seriously take in. Gene is a maniac on stage. Full of energy and angst.Springing back and fourth while belting out bowel shaking growls and “check your nuts” screams. Definitely something to see and hear. I spoke to Gene briefly after their set. A real engaging guy with an infectious smile. He gave me their CD which I thought was a really nice gesture. 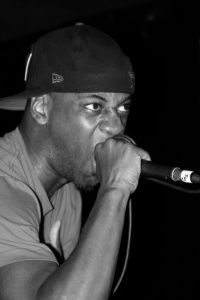 A few weeks ago I had mentioned the show to a friend of mine. She told me how psyched she was to see kylesa since they were one of her favorite metal bands. When it comes to people you’ve known most of your life there is a definite trust level. That goes for music just as much as anything, Before the show Darin told me that Kylesa had brought in a ton of gear including two drum sets. I immediately got the feeling this was going to be loud. Really fucking loud. I was not wrong in my prediction and was really glad I invested in those ear plugs earlier in the evening. 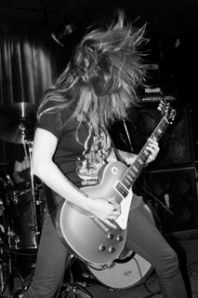 It took them quite a while to set up. So much so that I was contemplating calling it a night and just heading home. I’m really glad I didn’t because they left me stunned. Kylesa play a lot of styles of Metal but ted to swim in the sludgy, heavy side of the water. Having two drummers makes their sound deeper and a whole lot louder. Laura growls and screams while shredding on the guitar. While Phil and Corey fill the room with power and chaos. All taking turns with vocals.  One of the best bands I’ve seen in a really long time. I was left drained but wanting more. Definitely a band I’d like to see a couple of dozen times again. Thanks to Gene for the CD and Chris for coming down for the show.