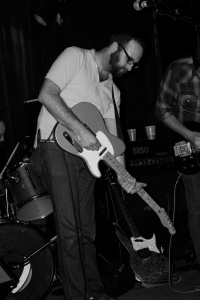 During the past couple of weeks New Jersey has quickly turned in Seattle on the East. It’s been rainy, windy and downright depressing. You can’t help but notice the effect it’s had on just about everyone. Due to allergies I lost my voice for about a week and learned the hard way how much we take the art of breathing for granted. Sick or not I needed something to do because I was getting downright depressed. So word that there was going to be a good show at Maxwell’s was the best medicine an old man could get.  This show took on a special quality due to the fact that Ringfinger and Cinemasophia were playing. This was the first time Tracy (Ringfinger) had performed at Maxwells since her days fronting Dahlia Seed more than thirteen years ago. I was lucky enough to see the first Ringfinger show in Richmond about a month ago and was eager to see her in what in a sense was a homecoming.

The small turnout of mostly friends and familiar faces which gave it a very intimate and personal touch. The kind that reminded me of better times musically. Cinemasophia opened the show. An awesome band with members hailing from as close as Brooklyn and as far as Richmond. I’ve already had the pleasure of seeing twice. Each time getting to know their song a little more intimately. They’re latest release is the first on Tracy (Ringfinger) and Dave’s (Rocketscience) label “Little Black Cloud” records. I’m not very good on describing sound or applying genres to bands so i’ll just say I enjoy their laid back and eclectic sound. 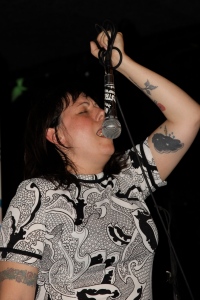 Next up was solo act Jean on Jean. I was not at all familiar with her. One girl playing a guitar. Pretty stripped down and folkie. Not my thing but I would imagine they eat this stuff up at the coffee houses in Williamsburg Brooklyn.

Tracy aka Ringfinger closed the night with a short but tight set. I noticed a marked improvement from the first night she performed the songs. The songs on her album “Decimal” pack the same genuine emotion and resilience  that made Dahlia Seed so loved. With Dahlia Seed she had the support system of a band behind her but without that I would imagine she feels a lot more vulnerable. Something that might take some getting used to. I would also think performing the songs is both painful and cathartic at the same time. It was a really good night for everyone. I think seeing her perform the songs at Maxwell’s made it all the more special. Thanks Tracy

One thought on “A night at Maxwells”