Despite the humidity and heat yesterday couldn’t have gone better if I had wished so. The day started with a run to the city and in particular Calumet Photo. As noted in previous blogs I’ve had numerous problems with sync cords not working properly and being an overall hazard for someone as clumsy and accident prone as myself. After my session with Alexandra this week I was determined to trash my sync cords and finally go wireless. I stopped in to Calumet to talk with one of the sales associates about a wireless device called the Pocket Wizard II. I wanted to know more about how it worked and make sure it was compatible with my Canon 50 D and Genesis studio lights. After a short demo I was convinced wireless was my destiny and made the purchase. I then grabbed lunch and headed back home to get some work done before heading back in to the city for my late afternoon session.

Earlier in the week I scheduled two portrait sessions within a few minutes of each other. Risky considering the fact that people always seem to arrive late no matter what. I also seem to have to deal with a lot of last minute cancelations. Luckily my first session arrived right on time and we were able to get started. I had met Theory a few weeks prior and had already had a couple of mutual cancellations due to the non stop rain we’ve been dealing with. Theory is a pretty cool dude. 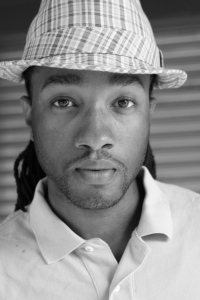 A talented dancer with a gift for humor and loads of personality. Our session took place around theold meat packing district on

the West Side of Chelsea. Theory being a lot younger and from the West Coast seemed to be surprised by the stories I told about how the area was when I was living in the city. How what is now a hub of galleries, boutiques and restaurants was once a thriving meat packing industry by day and a red light district by night. As for our session we were able to get a lot of great shots without taking all that many. Two of the things I’ve really been working on improving in my photography is consistency and attention to detail. I think I accomplished what I was looking to do.

Just as Theory had arrived right on time my next shoot was just as punctual. We had planned on meeting at the Apple store at 6:00. It turns out we were standing right next to one another and didn’t even realize it for a few minutes. My first impression of Hugh was right on target. Plain and simple this is what I would call a “Cool Cat’. Tall, long dreds and soft spoken. His prior emails where he addressed me as “Sir” led me to believe he was channeling a James Bond character. His sharp looking motorcycle jacket and Duccati bike only reinforced that image. Hugh is an aspiring actor who takes classes only blocks away from where I lived in Hells Kitchen. Our shoot would have went off without a hitch if it were not for some idiot knocking his bike over when pulling out of the parking spot in front of him. The hit not only knocked over the bike but broke his mirror and tail light. All while scratching his helmet. So much for accountability. No note was left. Other than that it was a stellar day. Hugh loved his shots and I’m looking forward to showing Theory his.