While I’m not sure where it all started, I have this vivid memory of being chased and caught for shoplifting by the local grocery store owner. I couldn’t have been more than six at the time, but I remember it so clearly, that I can vividly remember the coat I was wearing and how after being run down. Only to be dragged by my collar to my house, where some furious knocking at the door awoke my father, who still had about two hours of sleep left before getting ready for his 3:00 – 11:00 shift with the bus company. It was the most trouble I had ever been in up until that time, and it sure scared the shit out of me, but for whatever reason, it didn’t deter me from any future shenanigans. 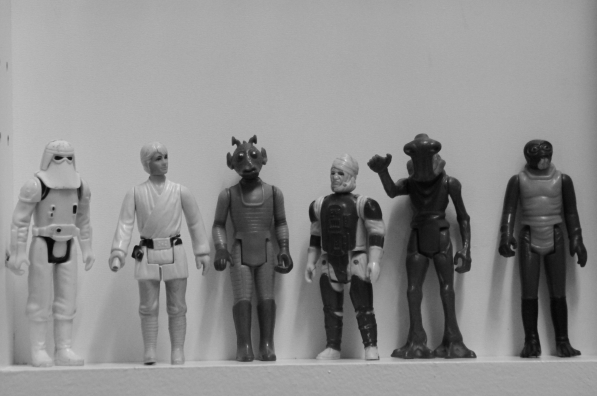 Now, before I go any further, I want to state in my defense that I wasn’t some problem child wrecking havoc throughout my neighborhood. It wasn’t one of those ‘lock your doors and board up your windows.’ Here comes that troublemaker, kind of scenarios. I was one of those kids who carried groceries, held the door for my elders, and called adults “ma’am” or “sir.” Then, Star Wars: Episode IV A New Hope came out, and the merchandising helped turn me into a kleptomaniac. And while I take full responsibility for becoming a conniving thief, I give a lot of credit to the marketing department at Kenner for turning a generation of kids into zombie-like consumers.

At least try to rewind to a time when there was a particular toy of toys so brilliantly marketed that they had children thinking of one thing and one thing only.For us, there was no Toy’s R Us within reach. They were way out in Long Island. Which, for us, was like a foreign nation. We were latch essential kids with parents who lived from check to check — struggling to pay the bills while putting food on the table. There were birthdays and Christmas. You were pretty much on your own the rest of the year, and during at least one of those occasions, you got socks and a sweater you hated.

Luckily, I was a pretty resourceful kid with a handful of friends who’s knack for finding trouble often found me. With a shopping center within striking distance and a five and dime type store that featured two aisles of toys, we had all the incentive we would need. At the time, I still had my army green snorkel winter coat from the winter before. Perhaps, due to wear or my custom tailoring to allow my front pockets to reach to the back of the coat, allowing me to stuff my somewhat bulky jacket full of whatever action figures I could manage.

Over the years, my friends and I managed to come away with quite a haul. As the stores became savvier when it came to dealing with shoplifters and keeping an eye out for unsupervised children, our methods changed and wavered. And though I’m sure we played only a minor part when it came to the changes in both displaying items and including barcode strips. At the time, we often credited ourselves for forcing the change. Looking back, we were much too young to comprehend the consequences of our actions. It was merely us against that older man who managed the store. Outwitting him seemed to be jus just as, if not more satisfying, as leaving the store with the best toy on the shelf. The rewards went far beyond whatever we might have stolen, the risk, the pumping of the blood, and the uptick of the heartbeat that created the rush.