I was having sushi with an old friend and mentor when he jokingly brought up a job he put me on to during the summer of 2012. Since we first met some years ago we’ve worked together on a few jobs and he’s put me on to a few clients along to the way. One day I get a call asking if If I would be interested in handling a job for him. “This woman I’ve known for about thirty years just lost her husband and she contacted me asking if I could shoot the services for her.” He went on to tell how he had known her for years and that she was bat crazy for as long and most likely, long before.

Despite his description, I decided to give her a call to discuss the details. One call led to another, and another and another before getting all the bat shit details of the event down. I knew from my very first conversation that she was nuttier than a fruit cake and had a habit of repeating herself numerous times.”Yes Ms. M., I got that the first eight times you said it.” The date and hourly rate were set. About four hours of work at $200 an hour seemed easy enough. I would go to the funeral home in the morning to photograph the body and the mourners, (Creepy I know) then head to the church where I’d photograph the mass and to the mausoleum where the body would be put to rest.

The day of the event everything went as planned. 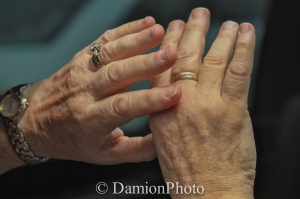 The wake, the funeral mass and the entombing went without any issues. There were weird looks along the way such as the mausoleum director telling me he had never in all this years experience a widow who wanted the ceremony documented.  Through all of it though, I conducted myself with grace and dignity while sharing my empathy with the family and there friends. So much so that I was invited to join them for lunch afterward. Lunch being the time where I was able to take the most natural and laid back pictures of friends and family she might never again get to see. “Phew, I actually got though this with my soul in tact.” Or so I thought.

As promised I had the images ready for delivery in less than five business days. I made plans with her to drop off the discs I created and pick up payment.

Shortly upon arrival everything began to unravel. I gave her the discs expecting the exchange to be short and without incident. “Let me see what’s on there.” As I inserted the first disc in to her decades old Del             I recalled her telling me she had no software issues and the she had many photos stored within. Slow became slower and she starts in “You need to fix my computer.” “There’s something wrong with it.” My blood pressure steadily rising, I kept telling myself to be patient. Still, I have seen no resemblance of cash or a check book.

After what seemed to take forever, the images began loading. I sat with her going from image to image. At one point we came to a B&W image “What the hell is that!?!” She rattled. I explained to her that I thought the B&W added a dramatic element and that she still had the original color image if she didn’t like it. She often muttered and spoke under her breath to which I would politely say “Excuse me?” Nice lady she was she would quickly squawk “What are you deaf?” Still no sight of any cash or check book. When I brought up payment she’d go into victim mode exclaiming “I’m not rich you know.” “This is a lot of money” and “I’m in mourning here.” The “What are you deaf?” squawks continued. To which I finally replied “I’m sorry, my ears are sensitive.” “They only register intelligent conversation.” An hour had past. A time where I clearly delivered  the product I was  hired me to document. I explained to her that all transactions have a beginning and an end and that I had delivered my part of the contract. It was now her responsibility to pay me. The insults and cries of poverty continued. Still no sight of any cash or a check book. I had reached my breaking point. 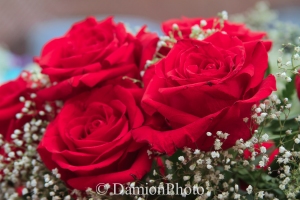 Correction, I was way past it. My mind was racing. At one point, I eyed a pillow in the adjacent room and for a second thought of smothering her with it. No one would ever come for her I menaced.               Finally, I reached my senses. My stay had gone past an hour and I was never even offered a glass of water. I got up confidently. “I’ve taken enough abuse from you.” “I’ve had it.” “Pay me now or I’m leaving with the discs.” I left, cursing and menacing inside. As I walked to my car I felt so overwhelmed with anger I could feel it in my teeth. I started the engine and drove away with a road rage      I can’t even describe. I called my friend explaining what happened. “I told you she was crazy.” He did his best to calm me but I was so far outside of myself that no words could ease my tension.

We finally met up and he agreed to work as a middle man. He was just as angered, if not more, by her b.s. as I was. We put together a plan to meet again at her home. I would keep my mouth shut as he worked as a diplomat.

“If she doesn’t pay you then and there we will inform her that she will be taken to small claims court and we will have a lien put on her house if payment is not made. The plan worked perfectly. Though she continued to play the victim and throw vague insults our way.  I received paid within five minutes of our arrival. I smiled, thanked her and offered my services to photograph her own funeral. It was a parting shot I felt I needed to regain the soul I felt I had lost in those rough weeks before. Though I’m sure I’ll never get asked to photograph a funeral. I promised myself I’d never consider documenting such a sad event again.