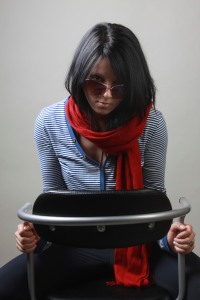 At the time of our prior session I was doing pretty good work but I was still in this phase where the real confidence wasn’t there. The shoot started off badly when I made a rookie mistake of forgetting the camera battery. I had charged it that afternoon but when she came to pick me up for a short drive to the Monroe Center I completely for got to take it out of the charger. We were half way there when I realized and had to turn back. Once we did manage to get started everything was fine but I was killing myself for that mistake. “She must think I’m complete nob.” We got some nice shots at the Monroe Center and headed back here to finish up with some studio work. Again, the work was good but somewhat rushed. She never said anything but I felt as if I left a bad impression with my amateurish mistake.      Fast forward almost two year and I’m ready. “Battery? Check. Lights? Check. CF Card? Check. Model? Check.” I fire my first shot and nothing. My Photo Wizard II is not communicating with my Genesis lights. No Flash, whatsoever. In the past when something went wrong I would panic and lose it. But I’ve learned that, as corny as it may sound, every problem has a solution. I tried everything. Everything was working but for some reason they weren’t communicating. Time was ticking and I’m thinking “I’m cursed” “Nothing is working and I’m going to have to send this woman home.” Finally, I ran to the bedroom and got my backup camera. Connected the flash and fired a test shot. Alas, I heard a pop and saw the light. “I can live.” “I have been spared the certain shame, humility and doom that would surely follow my failure.” Once we got started it was magic. I finally got to tend to that unfinished business. Zoia and I did great work together.

The red head from the former Soviet Union is now a Brunette and in those two years is even more beautiful. Later on I found out that is wasn’t the cameras hot shoe as i had briefly suspected. It was the setting. I had used it at a concert a week ago and disabled the flash. Just forgot to reset it. So yes, I’m still kind of a dork. I’m a little clumsy and forgettable. I’ve got a heavy case of ADHD but I’ve come a long way in that when I’m given a problem or hit a road block. I’m able to see it through. Find a solution or a way around it.