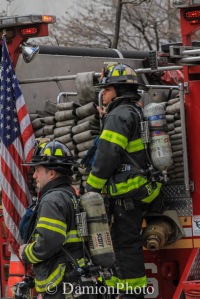 We had just exited the train at Brooklyn’s Jay Street Station when we were quickly overcome by the ear piercing sound of sirens. Quickly, I reached for my camera as I scrambled to get out of the path of the coming engines. Whereas in the past my eyes would be drawn to the intricacies of the fire truck itself.               I somehow found myself drawn to the firefighters, the uniforms, oxygen tanks and their proximity to the flag.     I took a few moments to set up and frame the scene before finally taking the shot. So instead of having a series of hastily captured images. I had one that I was really happy with. That and nobody got hurt. Pretty Cool.