On Sunday the 17th I l headed South on the NJ Turnpike to New Brunswick for brunch and an Punk show at the legendary Court Tavern,  We swept into town super early and did a little (actually, very little) exploring before grabbing a bite around the corner. All ages matinees are a rarity at the Court Tavern but Shannon Perez more than made it work. Instead of having the show downstairs or even in the back where numerous minors would be passing the temptation of the bar she had it in a small room just off to the side of the front door. (No one would even get as far as the bar.) The show opened with a five piece from Maplewood called Polyphony  (more on them in my next post)  and followed with Shannon’s band Hope You Die before making way for Four Fingers.

Four Fingers  is a band I interviewed a little over a year ago and have kept in contact with since. I can’t think of a better group of guys to throw your support to. Their style reminds me a lot of Adrenalin O.D. with some Blag Flag and Stooges thrown in for good measure. Tohm puts 125% of himself into every performance. Always making the crowd feel involved and injected into the music. I think a lot of that leads to his many performance injuries which again makes me think of the Stooges. This performance was the tightest I’ve seen them and to give Tohm proper credit, he didn’t injure himself or any one else for that matter. Chris reminds me a lot of Animal on the Muppet Show. Pounding away on the drums with wild abandon. I’ve never seen any one get so close the the skins while he was pounding them. Be sure to keep your fingers away from his mouth. Ryan, the newest member has fit in well and seems to be the glue they’ve needed all along. Then there’s Jeff. He seems like the calm within the storm but his guitar playing is a sickness there seems to be no vaccine for. Check them out if you get the chance. 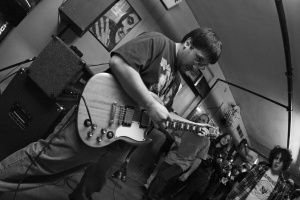 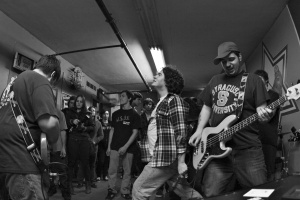 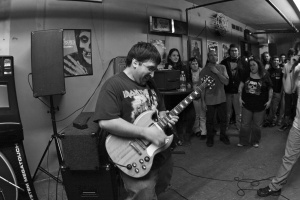 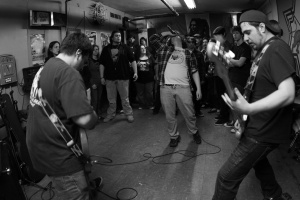 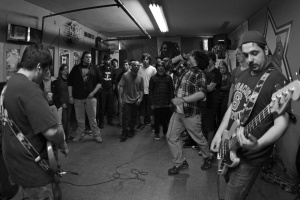 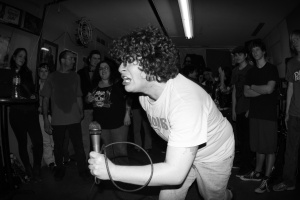 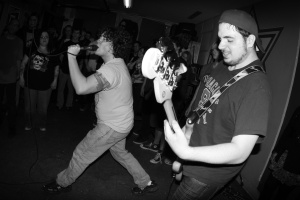 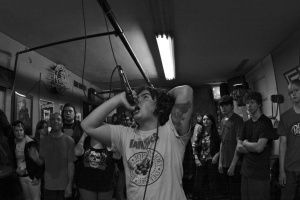 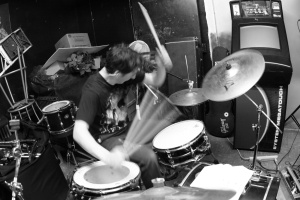 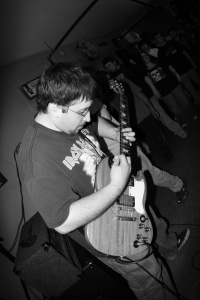 As I was walking in to The Court Taverns side room where Sundays all ages matinee was being held I was asked “Are you straightedge?” by a complete stranger. The question so caught me off guard. It felt as if I was just ambushed by the prize patrol and only the correct answer would give me a chance to hold the ridiculously over sized check. My first thought was “Maybe he recognized me from a show or affiliation with some older straight edge bands.” But somehow the question and the fact that it came from this complete stranger set me off or at least put me on, for lack of a better word, edge. I dryly asked “That’s the way you address a complete stranger?” “What the hell kind of question is that?” The exchange quickly ended and I moved to the bar to have a screwdriver. Later, after the show he told me he was doing a paper and if I had any knowledge or experience on the subject he’s like to ask me some questions. When I found out he was also interviewing Tohm from Four Fingers I said “Why Not” As we waited outside after the show I kept thinking this dude was off. Not a bad guy at all but at the very least, squirrely. We stood outside and spoke for a few before heading to the local Dunkin’ Donuts for what turned out to be one of the weirdest interviews I’ve ever sat in on. Everything about it from the pre-prepared questions to the robotic delivery and request that we each answer the questions individually without any one speaking at the same time. I found Tohms answers to be very intriguing and honest and I learned more about someone who is becoming more and more of a friend. His friend Dana who tagged along also answered the questions thoughtfully and honestly all while listening to everyone’s answers intently and making some of the most direct and intuitive eye contact I’ve ever seen. Excellent, considering she herself is a Journalism student. All in all the interviewer was very nervous and anxious. Never giving an ounce of his own experience to the process. It seemed as if he just spun a roulette wheel and picked whatever topic the dice landed on. It made me think of how awkward I must have seemed doing interviews for my first zine when I was fifteen. Regardless of the weirdness of those exchanges I got to meet some new people including Dana and had a story to tell when I got home. 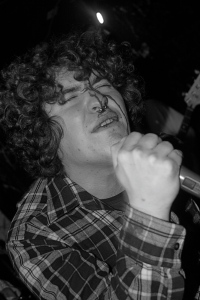 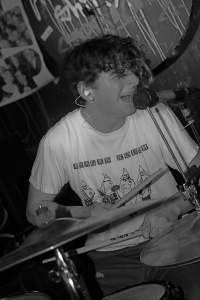 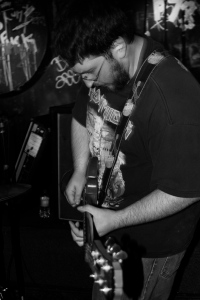 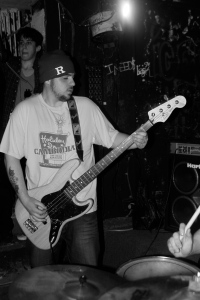 Here it is Monday and my plans to finally take the last half of what is to be a new portfolio to Duggal. My ADHD has kicked in hard and I’ve just about given in to it. I know for a fact my senses will return but in the meantime it’s best to just let things go. So I digress and look back on a Friday that had a shaky start but finished on very solid ground.

Dave and I have planned to head to Monclair to check out the band Four Fingers. Dave had recently reviewed their 7 inch on his blog and was pretty pleased with what he had heard. I’ve know the band for some time having seen them live and interviewing them for my website Unite. Unfortunately, Dave got sick and  I was on my own.  I pulled in around 9:00 and to be honest didn’t quite feel up for it. So I gave my friend Mandy a call to see if I could coax her out for a drink. Maybe seeing a friend would take the edge off.  To my delight she was already at Jake’s, which is just a few doors down from the club. “Come on over she said.” with glee in her voice. Just as the call ended I ran into the bands drummer Chris. “Hey Chris, can you text me before you go on?” “I’m going to meet a friend for a drink.”

The bar was in full swing. Complete with a forgettable cover band. I met up with Mandy and shared a few drinks. Mandy is one of my oldest and dearest friends. No matter where we are she introduces me to everyone around saying “He’s an amazing photographer.” Then going on to tell the tale of how we met in an A&P parking lot when we were teens and how we’ve been inseparable since. Just across the way I spotted Milton and headed over to say hello. The conversation, vibe and free beer were great but before I knew it I got that text. Promising to return I headed over to Meatlocker to catch the bands set. Four Fingers never let me down. The band personifies the ethos, sound and reckless abandon that drew me to Punk in the first place. Parts Adrenalin O.D., parts Black Flag with the danger of the Stooges. Tohm is a great front man who’s interaction with the  crowd insures they get involved. However that wild abandonment often leads to injuries. This time his face was covered in blood before the second song was done.I’ll say this “Real blood is always better than fake blood.”  Tohm, you’re a good dude but tone it down. Immediately after I headed back to the bar where I spent the rest of the night hanging with Mandy and getting to know my new friend Milton a little better. Not a bad way to start the weekend.

Forward: I’ve seen Four Fingers several times at the Meatlocker. The invites always emphasize “Everyone pays. No exceptions.” Yet Tohm always insists I do not pay.  I don’t consider myself special or immune from paying but it says a lot about Tohm and the band. After the set he gave me their CD “Good Luck with the Surgery”. When I got home I was both happy and surprised to see they used the band photo I took of them the night we did the interview. I was also very happy to see they gave me a photo credit.  Thus furthering my love for their ‘good guy’ status. 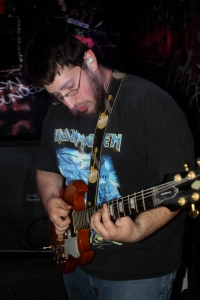 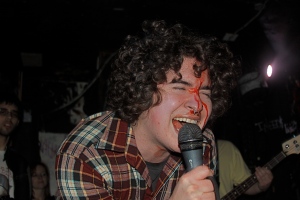 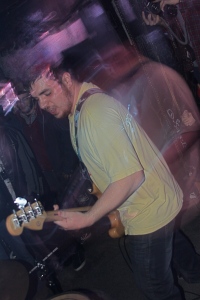