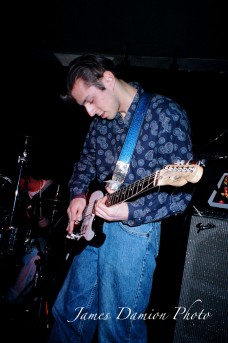 One of the earlier shots taken during my photographic journey. One I look back on with a sense of pride. This one of Jon Procopio playing guitar with Dahlia Seed at what I believe to be Maxwells. Jon, also known as Dapper Jon to some, played guitar with both Dahlia Seed and Dune Buggy. Two bands I loved and still love. Jon is, without a doubt, one of the nicer people I’ve met along the way. Long after the band’s breakup, I’d look forward to seeing him friends BBQ’s, parties and social gatherings. Being that Dahlia Seed were and still are a very special band to me, this will be only one of many posts featuring the band. For now though, I just wanted to give Jon and this image their propers.